It’s easy to get a boning knife confused for a fillet knife and vice versa because of how similar they look and how they are commonly used.

Even so, the aforementioned knives are not one and the same, and in this article, we will discuss the many ways in which they differ from one another. 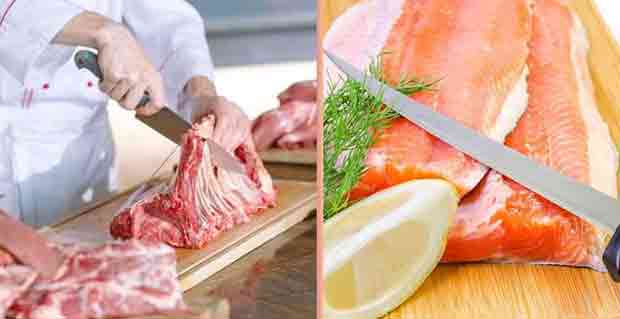 Fillet knives are typically made to be thinner than boning knives. That difference in design is necessary because fillet knives are often used to cut through more delicate surfaces.

A fillet knife is also usually more flexible than a boning knife. It has to be flexible because it will be used to cut and slice at odd angles. Without that flexibility, the cuts and slices will end up mangled.

The boning knife features a thicker profile than the fillet knife, but it’s still quite thin when you place it next to a standard chef’s knife.

A standard boning knife will also feature a straight blade. That blade has to be straight because boning knives are used to cut through tougher substances.

Boning Knife vs. Fillet Knife: a Closer Look at Their Differences

As you will quickly see though, appearances can be deceiving.

How They are Used?

Their names are dead giveaways for how they are supposed to be used. 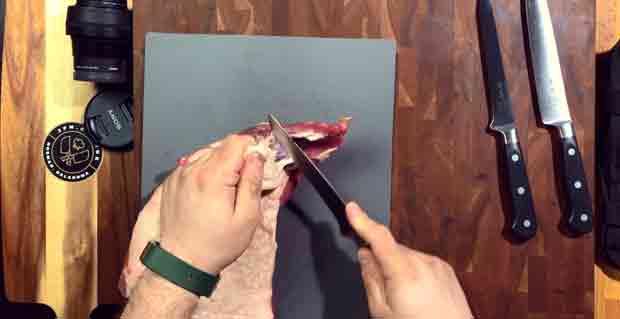 A boning knife is designed for the purposes of separating the meat from the bones of the animal carcass. Boning knives are slightly thicker and sturdier, and they have to be. They are supposed to be used on cuts of pork and beef, and other types of protein that feature a similar texture. Boning knives can also be used to debone chickens, ducks, quails, and even turkeys.

A fillet knife can also be used to separate animal meat from the bones, but they won’t work well on cuts of pork and beef. Instead, fillet knives are best reserved for working on fishes. You can use the fillet knife to really get into specific spots and pick out the tiny bones. Plus, fillet knives are so delicate that they excel at producing precise cuts that would look at home on a sashimi platter.

How They are Designed? 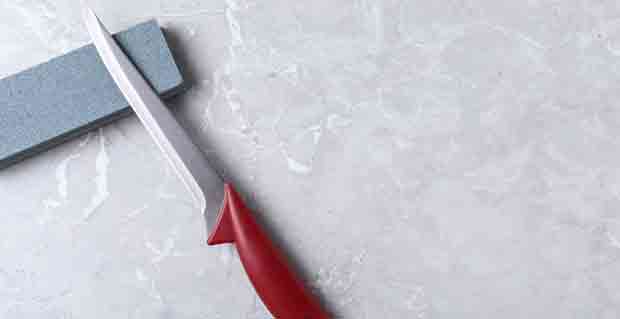 As mentioned earlier, the boning knife is the thicker of the examples of cutlery that are featured in this article. The boning knife still has a thin blade, but when you grab a hold of it, you will still be able to feel how sturdy it is.

Fillet knives feature an even slimmer profile, and they also feel very light in your hand. What you’ll also notice in fillet knives is their flexibility. The blade can bend in order to align better with the meat it is slicing.

How They are Curved?

Arguably the most significant difference between a boning knife and a fillet knife is the way their respective blades are curved.

Another defining characteristic of the boning knife’s blade is its length. It is a long blade, and you will need that when you are trying to debone the larger segments of the animal carcass.

In contrast, the blade of the fillet knife has a more pronounced curve that goes upward. The upward curve makes it easier for you to maneuver your way around a piece of meat and get the exact type of cut you want.

How They Hold Up to Applied Force?

Boning and fillet knives also differ significantly from one another in terms of how much force you can exert when using them.

Because of how the boning knife is built, you don’t need to be gentle when using one. If there’s a tough piece of meat that cannot be separated easily from the bone, don’t hesitate to put some elbow grease into your slicing motion to cut it loose.

You cannot do the same thing when you are using a fillet knife. Apply too much force when slicing something with a fillet knife, and there’s a good chance that you will have to get a new one at the store later that day. 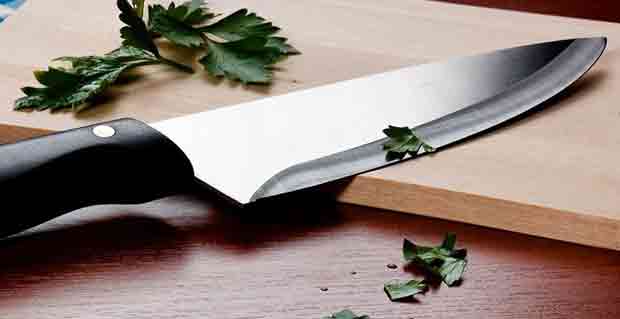 When shopping for a boning knife, you will have a few options to choose from. Many boning knives feature blades that are about five to six inches in length.

Blade lengths also vary when it comes to fillet knives. The shorter fillet knives will have four-inch blades, while the longer ones can also reach nine inches. The standard length for a fillet knife is 7.5 inches, per Fishing Rex.

How Maneuverable They are?

This is one area where the fillet knife simply has the boning knife beat.

The flexibility of the fillet knife is top notch and it is exactly what you need if you are thinking about creating your own sashimi platter at home.

Once you get to those portions of the fish that are curved in odd ways, you can just rely on the fillet knife to do most of the work you. Let the blade bend to match the contour of the fish and proceed with the cut.

Boning knives are still pretty maneuverable, but they are not on the same level as fillet knives.

That’s likely because blades made out of high-carbon steel are very sharp, and they can stay that way for a longer time compared to stainless steel edges.

As much as possible, you really should take the time to look for a fillet knife that is made out of high-carbon steel. Given what fillet knives are typically used for, it is essential for them to be as sharp as possible.  Dull fillet knives can only produce unclean and imprecise cuts and you don’t need anything like that in your kitchen.

Boning and fillet knives may have their fair share of similarities, but as you now know, they are still fundamentally different examples of cutlery.

Boning knives are also flexible, but they cannot bend and move around in the way that fillet knives can.

No one knife is better than the other because they excel in different ways. Ideally, you will not have to choose just one as both the boning knife and the fillet knife deserve spots in your kitchen. 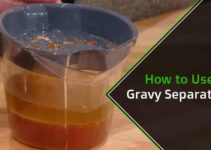 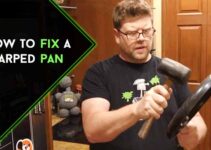 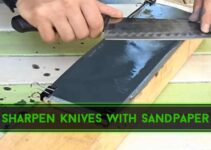