Home
Tips & Tricks
How to Keep Bread From Molding : 13 Methods That You Can Use

There is no doubt that bread is one of the most common foods on earth. Many people love to eat a fresh bread slice with their breakfast or enjoy it at dinnertime.

When the bread becomes moldy, is it still edible? Most people often discard it.

Some people enjoy making homemade bread using a bread machine or bread maker. However, if you want to buy store bought bread, there are a few ways to keep it from molding. Almost anyone in any kitchen can use these tips.

How To Keep Bread From Molding: 13 Methods 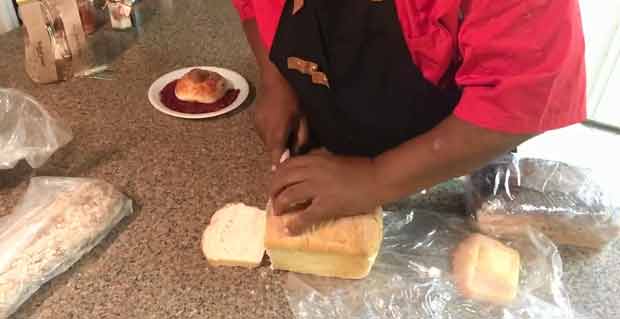 These easy methods will help you to avoid the unfortunate tyranny of moldy bread. You just need to follow the way you feel most comfortable.

Method 1: Store the loaf in the fridge or freezer

Frozen bread is one of the best ways to keep it from molding.

To keep the bread from molding, store the loaf in the fridge or freezer for up to 2 months. If you don't want to eat it right away, put it back on a shelf and then transfer it to the refrigerator when ready for consumption. This method will keep the leftover bread from molding for a pretty long time.

Method 2: Cut off crusts before storing 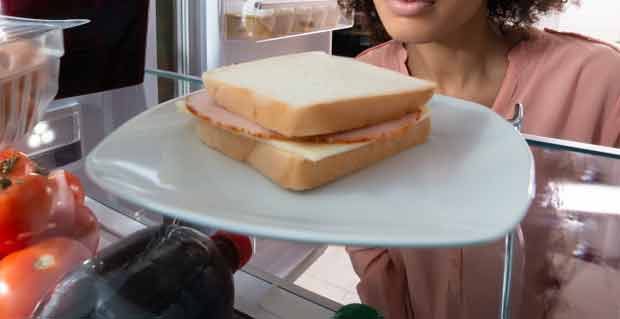 To keep fresh bread from molding, many people suggest cutting off the crusts before storing. This process is beneficial if you plan to freeze it because frozen water can seep into this open area and cause more spoilage.

Using a bread box or bread bin is a great way to keep your loaf from going stale. You can place the loaf in the center of it and then cover it with an airtight lid so that moisture doesn't seep into it, causing moldy bread.

If you plan on stacking over one piece of freshly baked bread together, create a physical barrier between them before storing. This procedure will make sure the pieces of bread don't touch each other, which could cause spoilage because molds spread quickly through contact. 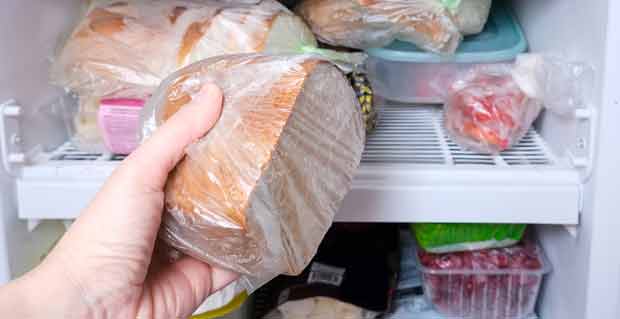 Another way to prevent molding is by keeping out any unwanted humidity or wetness that might be present in your kitchen cabinets. For example, stick some parchment paper over open shelves where the door won't shut appropriately, and store the fresh bread there.

Another option is a bread drawer. This handy appliance will keep the crust crisp for more extended periods because it allows airflow from below and above the entire loaf.

Don't overcrowd your storage containers with too many loaves at once.

If you have too many loaves in one container, mold can grow more quickly because of higher humidity levels created by the extra moisture inside.

Make sure there's enough space between each loaf so they're not touching one another or anything else that could cause them to spoil quickly.

Method 7: Don't store it near other foods with strong odors

Bread can mold faster if it's stored in an area with high humidity. To avoid this, keep bread away from other foods with strong odors, such as garlic and onions.

Also, ensure that the bread is not put too close to a dishwasher or garbage disposal because these appliances release steam, which causes food items nearby to spoil quickly.

If storing at room temperature, put something porous under the loaf, so air circulates freely around all sides.

This system could be a paper towel or dishrag. If you have nothing like that available, place it on top of an overturned bowl or cup to keep moisture away from the bottom crust and prevent bread mold.

When stored at room temperature using no type of airtight container underneath as protection against bugs, mites, or other critters who might want some tasty new bread, put it on top of a plate or bowl with an overturned cup. 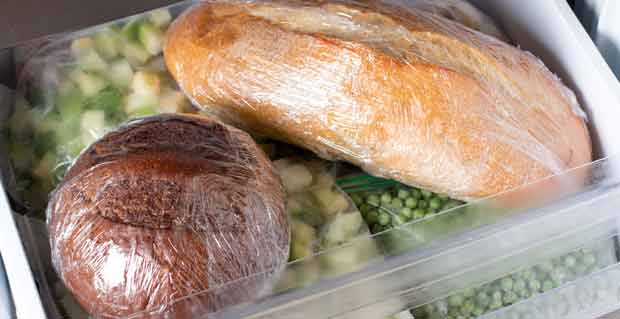 If you're not freezing or refrigerating the bread, another way to keep it fresh for more extended periods is by putting it in an airtight plastic bag or paper bread bag.

This method will seal out any wetness that might be present and help reduce humidity levels within the container, so there's less chance of molding from occurring.

Method 10: Place a slice of apple or lemon on top to keep

Place a slice of apple or lemon on top to keep out moisture and mold spores. This process will also help maintain its flavor for longer periods.

If storing at room temperature, put something porous under the loaf, so air circulates freely around all sides.

Method 11: Do not use plastic wrap use aluminum foil instead

Some people prefer to use plastic wraps when storing food items in the fridge. However, most experts recommend using aluminum foil instead of plastic wrap.

Because it prevents more air from getting around the bread and allows for more significant heat transfer between the surface of the loaf and its packaging.

If you love to eat raisins with your bread, be careful because they will spoil more quickly if stored in the same airtight container. Instead, you can store them in a separate container but keep the raisins away from the bread.

Rosemary is a herb that can cause bread to mold more quickly. So unless you want your loaf of bread to spoil, make sure not to store it near this particular plant.

Some Common FAQ's About Molding Bread

Answer: If it's discolored on top or if the crust has become hard and dry, then the chances are good that mold has developed on the inside of your bread.


Scrape off as much of the surface as possible and cut away any remaining crust that may be affected by the mold spores. Afterward, wrap up what's left with plastic or aluminum foil and immediately throw it in the trash bin.

Don't eat this bread because some fungi have already spread into other parts of your loaf, which means more than just its outer layer might have been harmed by something like molds.

If not using an airtight container to store at room temperature without covering it with anything porous, place it on top of a plate or bowl with an overturned cup so moisture cannot reach the bottom crust.

2. How do I prevent bread from becoming too moist?

Answer: If you're trying to keep the bread from becoming too moist, then be sure that it's not being stored near any sources of heat or moisture, such as the dishwasher or garbage disposal.

The best way to keep your bread from becoming moist is by storing it in the fridge, which will lower humidity levels within the container, so there's less chance of molding occurring.

If refrigerating, be sure that you wrap up any leftovers with aluminum foil for longer storage periods just in case they're not eaten right away when first purchased. This way is essential because something like molds could develop before anyone has realized what was going on inside their loaf.

3. When is the best time to eat a loaf of bread so that it lasts longer without going stale and moldy?

Answer: The best time to eat a loaf of bread is just after it's baked. That way, you'll be able to enjoy its fresh taste as well as its texture for longer periods without molding or becoming stale bread.

4. How long should I store bread in the fridge? 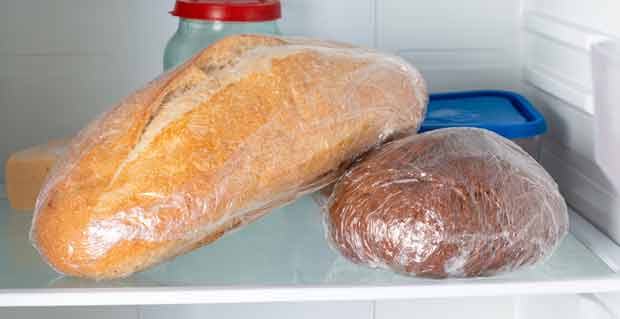 Answer: Once you've stored your loaf of bread in the fridge, it will last about a week without going stale or moldy. However, this can vary depending on how moist its environment is and what temperature range it's been kept at as well.

What type of container do you recommend storing bread if not using an airtight one such as Tupperware?

The best type of container you can use to store bread is an airtight metal one. If you're using plastic or paper, make sure that it's not wrapped tightly around the loaf, so there's more room for the surface and crust to breathe.

Answer: If your bread has turned moldy and spoiled, then the easiest thing to do would be to immediately toss it in the trash so that no one else eats it and gets sick from food poisoning.

You also might want to clean out any other items around where you stored your old loaf because this could make them more susceptible to getting moldy themselves too.

6. What are some tips for preventing bread from spoiling quickly after opening the package?

Answer: There are a few things you could do to prevent your bread from spoiling after opening. One is by submerging it in cold water for 15 minutes and then wrapping tightly with aluminum foil before storing it at room temperature or refrigerating it.

You can also wrap the loaf loosely in wax paper, place slices of apple on top (don't stack), and store them at room temperature without plastic covers if you're not going to eat within one week.

There are many ways to keep the bread from molding. The most important thing is to prevent the moisture in the air from getting into your loaf of bread, which will cause it to be dry and crusty or completely moldy at worst.

Many people recommend keeping a plastic bag around fresh loaves for this reason, but if you want an easy fix that doesn't involve any extra work using a brown paper lunch bag instead can also help keep the air out while still allowing some oxygen inside so it won’t go stale as quickly.

If none of these options sound like they would suit your needs, there's constantly freezing. Just remember not to take frozen loaves out too far before baking them 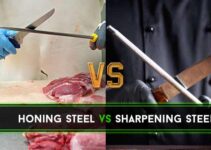 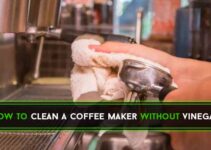